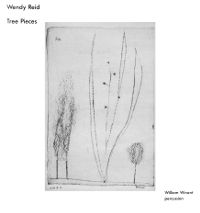 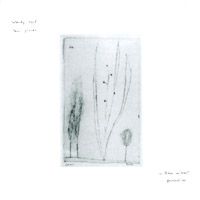 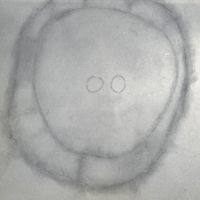 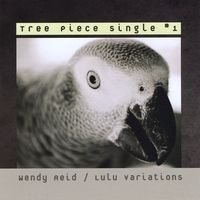 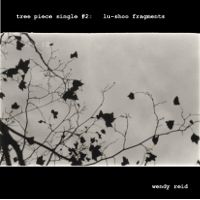 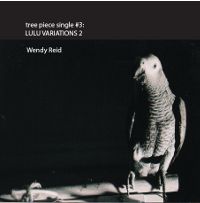 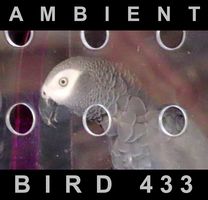 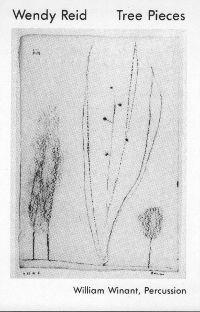 TREE PIECE #8 is an intimate dialogue of sparse and delicate timbres selected by the solo percussionist within the restrictions given by the composer. Unlike many solo percussion works, the piece is introverted in character and requires an unusual combination of restraint with poetic spontaneity from the performer.

Of all the Tree works, this composition probably encompasses the idea of growth or growing in the purest sense: sounds and silence are constantly growing from a source (the 'root' note), ever-changing and expanding, but in subtle ways, sometimes barely perceptible. It might be compared to watching a tree grow from day to day.

The Fibonacci series is not merely used as a compositional device as it is in other Tree Pieces, but is a visual as well as aural representation of the number sequence, and most aptly so considering the nature of the work.

William Winant, for whom the piece was written, played the premiere performance May 29, 1984 at the New Performance Gallery in San Francisco.

TREE PIECE #10 is based on a poem by Jeff Reid: but/contradiction is/affirmation/of. The composition might be described as a ritual with no beginning and no end in which words and music play reversed roles--that is, words 'sound' and notes 'speak': the words of the poem are used (much like a text-sound composition) for their rhythmic and sonic qualities, while the musical materials, motivic and timbral in nature, act as symbols for the words and are frequently interchangeable with them. This inter-relationship of words and music (sound) attempts to achieve a coherent totality strangely expressing the connotative meaning of the poem through a peculiarly autonomous "syntax."

The work is comprised of various movements in which text and note symbols undergo contrasting processes working within the context of the larger process. Each word in the poem except for the last word 'of' has a corresponding 'note symbol' which is distinguishable by its own unique timbre as well as pitch. Once again, pitches are given within a spatially notated score. The composition has a microtonal dimension to it by the fact that the musical motivic material is echoed throughout the performance but never in perfectly pitched unisons. It parallels the textual motivic material in that the syllables are never repeated with the same exact intonation. In live performance, instrumentalists surround the audience, immersing them in sound, making them active participants in the ritual.

TREE PIECE #10 is dedicated to the memory of  Charlotte B. Reid. It was commissioned by percussionist William Winant, who performed the premiere of the work together with the composer on March 31, 1982 at Mills College in Oakland, California.

Tree Piece #17 is based on words of Samuel Beckett:  "nothing is more real than nothing".  The work wanders seemingly aimlessly through various timbral and textural planes.  Written in spatial notation, sonic phrases expand according to the Fibonacci number sequence. Performers choose their own path and pace with a common beginning and end.  The timbral character of each section is determined and revealed in performance by the abstact occurring at the end of the piece (being the final section) in which a specific pitch and timbre is assigned to a specific fragment of the text. The text appears at the end, spoken by a single performer.

Tree Piece #17 was commissioned by Don Buchla who along with percussionist Mark Goldstein, gave the premiere performance on January 6, 1992 at Merkin Hall in New York City.

TREE PIECE #21 is an environment in which taped sounds of a 19-minute improvisation by a bird (Pacific Parrotlet) interact with live performers playing a written score of bird-like motives to be sounded freely with great variety of expression and timing. The piece goes through various stages of notational transformation in which the performers acquire more freedom of improvisation along the way. In the beginning, all aspects of the music are strictly notated; then, the performers move into a section of spatially notated motives and pitches. Finally, a level of improvisation is arrived at in which the order, relationship and microtonal pitch alteration of motivic material can be manipulated by the performers so as to create music like birds.

The performers have a challenge set before them in that they interact not only with each other but with a bird, the parrotlet whose life is but one long incredible improvisation. Violinist Mary Oliver commissioned the work and it is dedicated to her. She gave the premiere performance with William Winant September 13, 1985 at the New Performance Gallery in San Francisco.

TREE PIECE #34 creates a landscape in which live performers play with and against a background of two taped ostinati of croaking frogs. The oboe assumes the role of an 'abstract frog' playfully interacting with the taped real frogs, while the percussion is transformed throughout the work from reflector of the 'abstract frog' (- sounds seemingly 'bouncing off' the frog croakings) to imitator of the 'abstract frog' by use of various timbral techniques to finally breaking away and becoming an independent voice,-another frog which interacts with the others. Though pitches are determined, the composition is written in spatial notation allowing for a freedom of interplay between parts which would be impossible within the confines of traditional notation.

As in other Tree Pieces, the Fibonacci series is used as a structural device. Most prominently, it can be heard in the oboe: the number of pitches in a phrase expands according to the Fibonacci number sequence. At that point where the percussion becomes an independent voice, the number of pitches of both oboe and percussion are taken into account in phrase groupings. The number series is also prevalent in the taped real frogs where the number of croaks in a phrase again expands according to the sequence. The over-all effect is that of cell-like units of sound growing into seemingly endless phrases of frog-like communications.

This work is dedicated to oboist William Banovetz and percussionist William Winant who gave the premiere performance on November 16, 1985 at New Langton Arts in San Francisco.